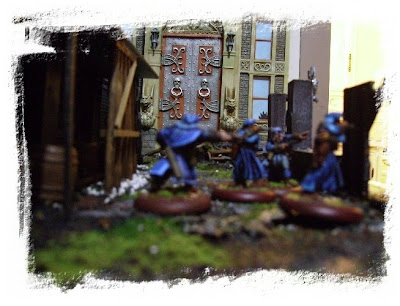 Well, then. I guess I won't be frying cortexes with my Gun Mages anymore, huh?
They are FA 2 so that's cool because of course I have two units of the silly hatted fellas.
Gun Mages in MKII cost 7 points and now wield magical magelock pistols.
Their stat line stayed the same except for a drop in ARM.
Arcane Inferno is now a CRA with POW 10 instead of 14.
And they don't have Shocker anymore, but they do have a nice choice of three different Arcane Effects.
I always liked the Gun Mages. I liked the look of the model, and the fluff. I can still see me using the Gun Mages but they seem a little lackluster right now because of what the Dude could give them. Now that The Dude is different, they aren't quite as shiny and cool as I thought they were with the release of Legends. But, it's not the end of the world. They still have some cool abilities and will serve their purpose in a shooty list.
I'm still giving the Gun Mages a thumbs up.
What do YOU think?