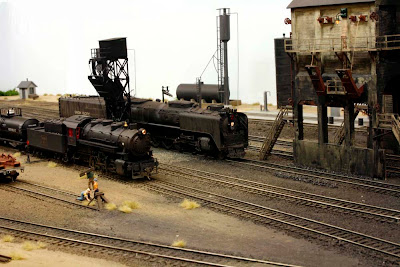 The next issue of NO QUARTER is supposed to feature some information on railroads in the Iron Kingdom. Being a fan of both real life and model railroads, this sounds like a good thing to me. If you're designing a railroad layout, one idea might be to recreate a supply depot.
Now, I'm making an assumption here. I'm assuming that an Iron Kingdoms steam locomotive is fueled by coal and water, not wood and water. In the United States up until 1870, almost all of the steam locomotives burnt wood rather than coal. However, as it became obvious that coal was the more readily available (and I guess better) resource, they switched from wood to coal.
I'm also not taking into consideration any bells and whistles that might come from magic. I'm sure that considering that the Iron Kingdoms is a high magic environment that magic will take some effect on the powering, maintaining, and so forth of IK Railroads. Heck, maybe there will be Railcasters that operate trains like a Warcaster operates Warjacks. Who knows.
So anyway...
Steam locomotives need constant maintenance, supply, and waste disposal. So along the service lines, depots were built to meet these needs in a "quick" and "efficient" manner. The expectation of a supply depot would be to hold, maintain, and store the basic materials needed to keep the trains running from point A to point B. If we ignore the complicated systems of signage, switching (including Wye and turn abouts), markings, signaling, and man power ... we can focus on supply issues.
COAL: Coal burning steam engines require tender bunkers. A medium sized 32-foot tender holds about 15 tons of coal. Larger tenders could be filled to capacity at about 22 tons. Depending on the number of locomotives operating on a given track, and the distance required to travel from point A to point B, a basic supply terminal usually needs about 28 tons of coal every day for each operating steamer assuming that the locomotive was making a round trip. That's a lot of coal. Thank Marrow for Labor Jacks, huh? 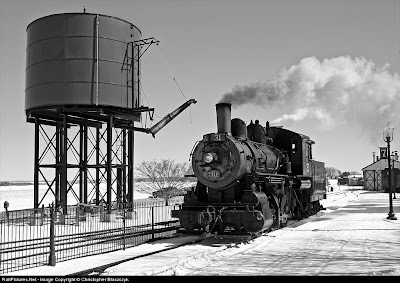 WATER: Water is essential in the powering of steam locomotives. I read recently that it takes about 15,000 gallons of water to properly operate a steam train running under full power for a typical run from point A to point B. In Pennsylvania, rail companies required that servicing companies station a water tank every twenty miles along a given railway. Why? To avoid BOILER EXPLOSION. If you run into a problem during transition, get short on the supply of water and allow the boiler area above the firebox to boil down to nothing ... then BOOM! And let's face it ... BOOM ... isn't going to make for a good day on any railroad. So the Iron Kingdoms would need a constantly supply and resupply of water throughout their lines. Also, the maintenance of watering stations would be very important. So considering that the Iron Kingdoms is constantly at war, crippling supply lines of water would be a key objective. 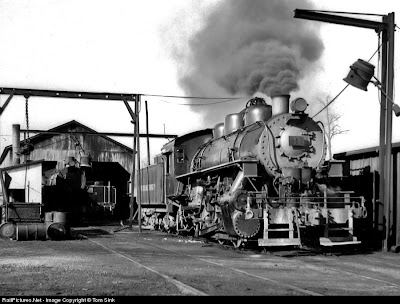 ASHES: Burning coal leaves waste products including ashes, cinders, and clinkers. However, ash-pan capacities do not appear to be a readily available steam statistic. We can figure that the most basic characteristic of coal is that it leaves 10% waste when being burned for steam power. So if the basic steam locomotive supposedly needs almost 50 tons of coal every day to complete a "long round trip" and there are at least two locomotives running on each expanse of track (One for main line and one for service line) then a typical depot might be taking in about 10 tons of ash waste every day. The service lines would quickly become littered with cinder cars and ash pits. So in that case, it would make sense that a typical Iron Kingdoms mainline would need at least three different trains running at a time: one for main transport, one for supplies, and the last for disposal of waste. And the last two are just to maintain a single service station. (But again, I am making assumptions. We'll see what NO QUARTER'S article has to say...)
SAND: Sand is needed for a servicing station. Steam locomotives are equipped with sandboxes from which sand can be deployed to the rails to improve braking and traction in wet or icy weather. A sandbox on a large locomotive can hold up to 60 cubic feet of sand. A typical 40 foot gondola can hold about 1000 cubic feet of sand in a 50 ton load. So depending on the weather, and the need for sand, a typical depot may be filling and refilling the sand towers and sand houses repeatedly.
So the typical WARMACHINE layout featuring a depot could allow for a lot of interesting scenery. You've got multiple crisscrossing tracks, including a possible Wye or a roundhouse if you're into modelling such things. Water towers, sand towers, ash pits, and outbuildings would be a must. You could also add in some free standing gondolas or freight cars that are being used for storage or waiting for transport.
I'm looking forward to reading more about Railroads in the Iron Kingdoms. How about you? Feel free to leave me a comment.