Okay, first off let's be clear. I am not employed by Privateer Press or Dwarven Forge. So what I am discussing here is not some expert information that should be etched in stone. It's opinion, folks. This is in fact ... a blog. I am simply a fan of both companies and the product that they have supplied to fellow geeks like myself. 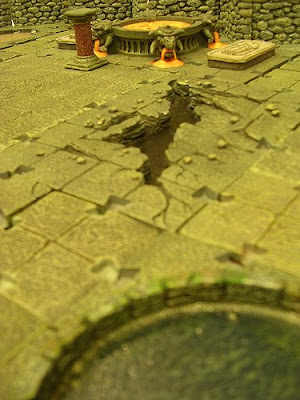 If you don't know what WARMACHINE is exactly ... Why not?! Go here and read about it. I include this because I recently posted some pictures in the Dwarven Forge forums and many of the hobbyists there were not familiar with Privateer Press (PP) or WARMACHINE.
Likewise, if you have no idea what Dwarven Forge might be, click here. They make really cool polystone terrain pieces that can be used to create buildings, dungeons, caverns, and more.
So anyway...
If you plan to use Dwarven Forge (DF) stuff as terrain for games of WARMACHINE, please understand that there are some basic elements you have to wrap your head around:

That's all I have for now. I'll take some pictures, and post some more information soon. I might even play out a MKII Field Test using some of my DF terrain and post a short battle report.

Leave a comment if you wish, and check back soon.