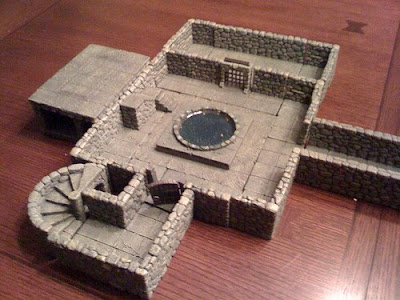 Depending on what sets you have in your collection, setting up Dwarven Forge for use in a game of WARMACHINE can be as simple as trying to create wide rooms and double sized hallways. There will be narrow sections where only small based models will be able to enter, but that's okay. Just discuss it ahead of time with whomever you're playing with and make sure you're both on the same page as to entryways and which size model can fit where in the game. 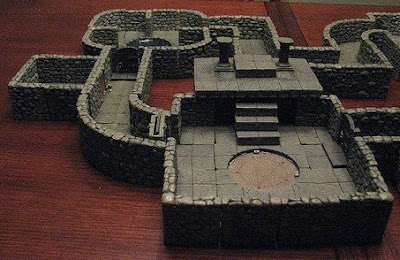 Personally, I have the following sets: Cavern Set, Cavern Passage Set, Two Fantasy Room sets, a Narrow Passage Set, an Advanced Builder set, the Wicked Additions #1 and #2 sets, a Room and Passage set, two Ogre Den's, a Sci-Fi Alpha Expansion set, and 12 of the 6" x 6" Square Floor sections. So I have a lot of different options for setting up and arranging the sets in such a way to create a good WARMACHINE environment. 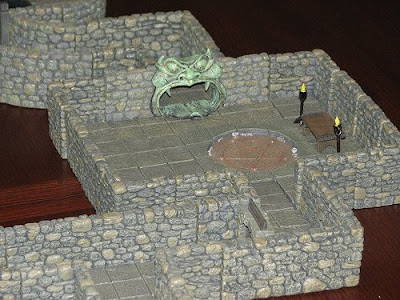 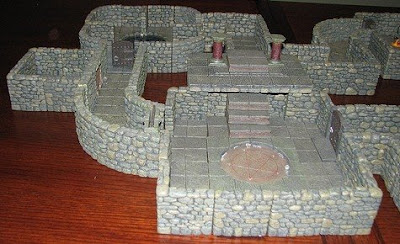 Megan and I cleared a spot and put together a layout on a 24" by 48" section of Battle Board.

We agreed that the Pool would be considered Deep Water. The Pillars would block LOS. The Crypts were considered Impassable. And the Cracked Tile sections would be Rough Terrain. The sections of DF walls are considered to be ARM 18 with 1 Damage Capacity per inch. Walls that block Warjack entry may be destroyed to create Breaches. All normal tile and stone sections of flooring are considered Open Terrain.

Megan decided to play Cygnar and I would play Mercenaries.