Magnus had been using the mine as a hideout. He was dealing in blackmarket 'jack parts with a few members of a pirate crew. Caine had managed to show up right in the middle of the transaction, so the two forces join in an effort to eliminate a common foe. 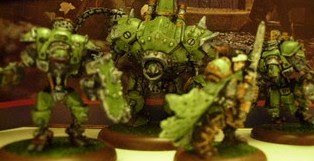 I deployed Magnus to the top of the ramp, and clustered his force around him. Boomhowler and the boys would act as a living wall to draw out the enemy and allow for Magnus and his 'jacks to get in close for some hack-n-slash. I planned to utilize the narrow center of the board with the walls to tie up the Cygnar force and limit clear shooting lanes. If you look at the picture below you might notice a "stone boulder" in the lower left corner. This piece of terrain was allowed to be used as a missile. We worked this out as a Special Action ahead of time. I really wanted to get my Freebooter up to the boulder and toss it at the enemy, so I made sure that happened. The Mule and Renegade didn't waste any time popping the boys in blue with their ranged attacks, right before Boomhowler and his boys smashed into the enemy lines. 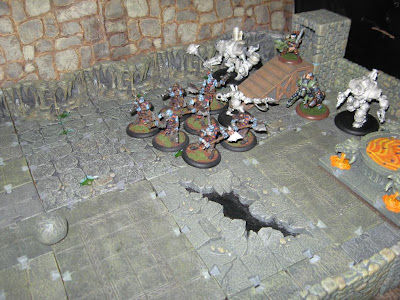 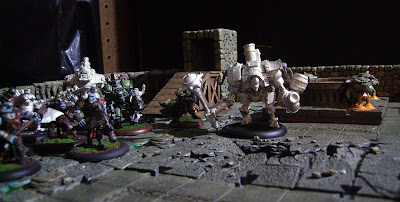 In the picture above you can see that the Mule took up position right in from of the section of Cracked Tile which counted as Rough Terrain. The Mule and Renegade both popped the Defender hoping that this would somehow help Boomhowler and Company. Luckily, it did. With the Defender's Movement sytem knocked out it made Boomhowler's job a little easier. 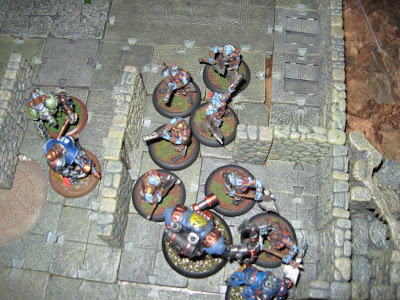 The Renegade did its terrible work on the Hunter but only after taking a nasty shot on approach.
Boomhowler and his boys put axe to metal, trying their best to hold out against an onslaught of Cygnar Warjacks. The tight spaces helped to tarpit both armies for a short period of time on the right hand side of the board. 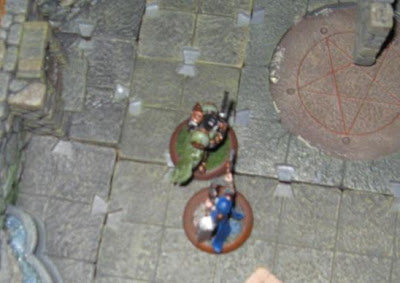 Meanwhile, Magnus was able to run ahead on the left hand side of the board. The Freebooter tossed the boulder and took out a couple of Arcane Tempest Gun Mages. Squish! Magnus was able to engage the GMCA in melee. Megan was unwilling to use the Gun Mages or Caine to fire into combat in case she would actually miss and hit her own GMCA. Magnus easily cut down the GMCA and made a wild rush to assassinate Caine. However, in the end, Caine survived the assasination run. My own "bold" move actually was my demise. Caine flashed to the top of a low wall, blasted away with his pistols and then popped his feat. When it was all over, Magnus was down for the count.

Cygnar had control of the Mine, and had captured The Traitor!