WHATEVER! WAR LEAGUE RAGES ON

The War League continues at Whatever! in the DuBois Mall. 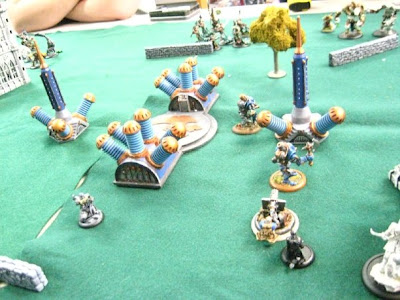 Larry and his Menoth army won the first phase of the War League, and he continues to rampage through the other armies. Scott and his Trolls are a real threat followed by Pat and his Skorne. The second phase of the War League will end on July 1st so if you want to get a few more quick games in make sure to rush on down to the store today.

I stopped in after work, and was pleasantly surprised to see the gaming table set up and a group of the faithful gathered to talk shop. I got a chance to hang out with awhile and discuss WARMACHINE and the Local Gaming Community. I also had a chance to meet a young man who was brand new to the game. He was in the process of building a Khador army with the Battlebox as a starting point. (And I got to watch Scott trying to glue together Assault Commandos to help the young man out, so that was amusing too.)

Rumor has it that Cygnar has declared war on Menoth. Get ready to ride the lightning, Larry.

Keep on rollin' sixes and see you over at Whatever! in the DuBois Mall!