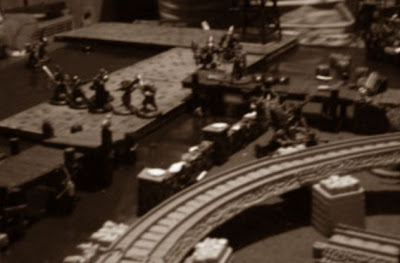 Major Markus 'Siege' Brisbane: Explosivo - When target friendly model makes a normal attack with a ranged weapon, the weapon causes magical damage and become AOE 3 if it was AOE -, then Explosivo expires.

Charger: Duel Cannon: Powerful Attack - When attacking with this weapon, this model may spend 1 focus point to boost all attack and damage rolls for the attack.

If Siege casts Explosivo on a Charger and the Charger attacks with it's Duel Cannon and uses Powerful Attack then all the blast damage rolls be boosted as well.

Email ThisBlogThis!Share to TwitterShare to FacebookShare to Pinterest
Labels: MKII