RING AROUND THE FOREST 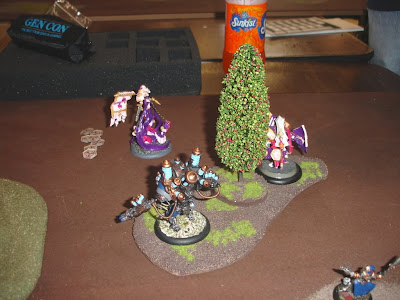 It wasn't long ago that I played in a 1-1-1-1 event.
The first round I played in was against the Protectorate of Menoth.
Faction: Protectorate
Points: 350
Model Count: 9
Victory Points: 12
Harbinger of Menoth
Avatar of Menoth
Exemplar Seneschal
Daughters of the Flame [6]
And I was playing Cygnar.
Faction: CygnarPoints: 349
Model Count: 11
Victory Points: 12
Captain Victoria Haley
Thunderhead
Professor Viktor Pendrake
Trenchers [8]
Deployment was simple. She deployed first. The Harbinger was placed right behind a large forest template. She put the Avatar right in front of the Harbinger. The Paladin was right beside the Avatar. The Daugters deployed off to the side from the group. I deployed The Thuderhead up front opposite the Harbinger with Haley behind. That put a big forest template between both warcasters. Pendrake (who was included because locally there's a lot of HORDES players at events...) started up on a hill behind the Trenchers who deployed opposite the Daughters and Dug In.
The way things played out was fairly funny, and a lot of fun in retrospect. (Frustrating at the time.) The Daughters died a horrible death to the hail of lead from the Trenchers on turn one. On turn two, the Trenchers murdered the Seneshal in the same manner. By turn two, the "ring around the forest" game had begun. Every time I moved the Thunderhead and Haley towards the Avatar and the Harbinger, she moved them away sticking close to the forest template. She kept dishing out Word of Law, then sitting on the rest of her Focus to boost her Power Field to increase ARM. Haley and the Thunderhead kept tossing ranged attacks at the Avatar and Harbinger. With Temporal Barrier pulsing out there, Haley was slowely gaining ground on the Harbinger. I
Long story short, the Harbinger and Avatar kept moving away and around the forest template. The Trenchers cut her off at the pass and started popping off shots at the Avatar, slowly tearing it apart. Because of the Harbinger sitting on Focus and Awe, I didn't waste time shooting at her with the Trenchers. However, this is when I got reckless and made some mistakes. I knew time was running short, and I was annoyed at the "ring around the forest" tactic. I already has Pendrake in the woods. I declared that Pendrake was moving to the edge of the woods and tossing his bolo in an effort to Knock Down the Harbinger forgetting about Divinity. (I had asked my opponent if the Harbinger had Perfect Balance, but didn't say 'can she be knocked down?') So obviously that didn't work. Then I moved the Thunderhead as far into the forest as I could, trying to put it into a position that no matter which direction the enemy models moved next turn, the Thunderhead could pop out of the woods to engage. And then Haley...
That's when time was up and the game was over. I had won by Victory Points.