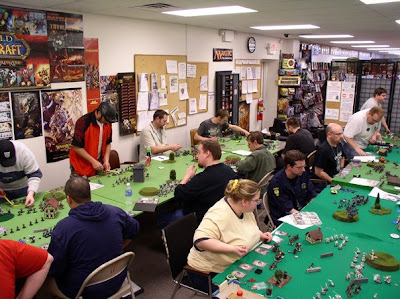 The Gaming Organization of DuBois (G.O.D.) set sail on to Comic Store West in York on Saturday for their Schism event. All in all, we had 10 of the "local" players drive out for the event. There were 26 players playing in York's Schism which was astounding! I know that everyone had a lot of fun. Thanks again to the staff of Comic Store West and Press Ganger Undead Dan.
We also started to discuss the possibility of hosting an event this Summer featuring the fancy new WARMACHINE/HORDES trophies. We need to discuss some details with other clubs and Press Gangers to coordinate a time that won't conflict with conventions and major events. We'd like to pull in players from all over PA, and beyond. That would be awesome.


So save your pennies, and keep an eye out ... and make plans to come roll dice with us.

Email ThisBlogThis!Share to TwitterShare to FacebookShare to Pinterest
Labels: EVENTS